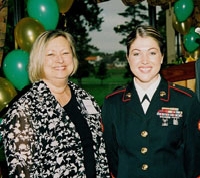 Long before my feet touched Iraqi soil-before I even joined the United States Marine Corps-I was a veteran of a long war for survival.

My first foe was my father, who was horribly abusive to my mother and me. When he finally left, a new enemy surprised me: my mother's demons. I was 13 when my mother's mental illness drove her to lock me in a back bedroom of our house-without food or water. By the time the police broke in a week later, I was literally starving. When I got out of the hospital I had a new status: foster kid.

During my five years in foster care I had more than a dozen social workers. Nearly every court date meant meeting a new lawyer. But through it all I had just one CASA volunteer: Sally Payne.

Throughout all the changes and different people I had to deal with, Sally was the one person who was there just for me. Knowing Sally cared about me meant the world to me. She was the anchor I desperately needed to stay in school, to keep moving forward, to make the choices that got me safely out of foster care and into service to my country. She made me believe that I was destined for success-in college or in whatever else I decided to do.

Whatever else" turned out to be joining the Marines-which I did as soon as I turned 18 without consulting Sally or anyone else. You see, while I was in foster care, my mom died-homeless and alone. I worried that I might be biologically programmed for a similar fate. The United States Marine Corps promised a roof over my head, job training and security. Sally wasn't thrilled with my decision, but she trusted me to make my own choices and she supported me.

I was a Marine from 2000 to 2005, and I served two missions in Iraq. Today I am 27 and a civilian police officer at Marine Corps Air Station Miramar in San Diego. I am also a college student, studying psychology. Sally's lessons have never left me, and neither has Sally. She will be in my life forever.

I am living proof that CASA volunteers change kids' lives.

FOCUS On Youth/CASA serves the 21st District Courts of the City of Martinsville, Henry and Patrick Counties. The organization recruits, trains and prepares everyday citizens to become sworn officers of the court as Court Appointed Special Advocates. CASA volunteers are needed to serve in abused and neglected children. We are the Voice of A Child. Training for new volunteers begin at 6pm Tuesday, January 17, 2016 in the West Piedmont Business Development Center located at 22 East Church Street, Martinsville VA. For more information call 276-403-5691 or 276-403-5058. To apply or to lean more visit our website: www.foycasamhc.org.